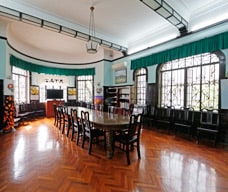 This original building in the architectonic heritage of Macao houses a number of documents, paying homage to the stay of Dr. Sun Yat-Sen in Macao. He was the mentor and driving force of the Chinese republican revolution, which overthrew the weak regime of the Qing Dynasty. A charismatic personality that united the Chinese, he is therefore considered as the "Father of the Nation". The house bears witness to his short but significant stay in Macao at the beginning of the last century when, while fleeing the power of the imperial mandarins, he tried to move his supporters in order to plan for the establishment of a new regime in China. In Macao he received the support of friends, at the time important and powerful persons in political and social of Macao.

Add to Your Trip Planner
Map